Even more noticeable than the rise in occurrences of a fatal car accident in Indiana, the number of Indiana motorcyclist fatalities reached a five year high of 147 fatalities in 2017.

So after reviewing these statistics, the incidents of a fatal car accident in Indiana and fatal motorcycle accidents in Indiana are actually increasing.

Many people do not understand the laws surrounding a fatal car accident in Indiana.  The law is the same for fatal truck accidents in Indiana or fatal motorcycle accidents in Indiana.  This is totally understandable as the law is complicated and most people are not lawyers and do not need to know this information.  But if you are here reading this article, you are interested.  So I am going to try to explain the complicated law in the simplest terms possible.

As a disclaimer, there are many more issues in Indiana negligence law than presented in this article.  This article is not intended to cover all the issues in Indiana negligence law, which would probably take thousands of pages.  This is just to give you a basic understanding of how things work.  If you or a loved one has been injured or killed in a fatal car accident in Indiana, you should speak with a qualified Indiana Personal Injury Lawyer about the specific facts of your case.  This article can help you familiarize yourself with the framework, but a qualified attorney needs to evaluate your case for you.

It is very important to note that all lawsuits for negligence in Indiana must be filed within two years from the date of the accident/incident.  This is known as a Statute of Limitations and it prevents any lawsuits from being filed more than two years after an accident or injury.  If you or a loved one has been injured due to the negligence of another and are seeking legal help, this should be one of the first questions you are asked.

Broken down to its simplest form (aside from duty and causation which we will discuss in another article), there are two parts to every negligence lawsuit, whether it resulted in property damage, injury or a fatality:

So let’s take a quick look at these issues.

Liability is the determination of who is ultimately responsible for causing an accident.  Indiana uses a system known as modified comparative fault in negligence cases (except ones involving the government).  This system recognizes that situations aren’t always black of white, but shades of gray.  An accident is not always just one person’s fault.    Liability is different than fault.  More than one person can be at fault and liable and conversely a person can be at fault but not liable.  This is confusing so let’s look at an example.

For example, Mike is trying to turn left at an intersection with a traffic signal.  Mike has a green light, but not a green turn arrow, and therefore, he can turn left at the intersection but the law requires him to yield to oncoming traffic before turning.  Mike sees Daniel’s car coming but Mike thinks he has enough time to turn so starts to turn.  As Mike’s car is turning, his car hits Daniel’s car as Daniel is passing through the intersection.  Daniel thinks the accident is Mike’s fault for turning into his vehicle, but as it turns out, the evidence shows that Daniel was speeding 20 mph over the speed limit.  In this case, both drivers may have some comparative fault assessed to them by a jury:  Daniel for speeding and Mike for failing to yield.

In Indiana, a jury (or judge) decides how much comparative fault to assess each party in an accident.  Under Indiana’s modified comparative fault system, a Plaintiff can recover in a lawsuit for injuries as long as his fault does not exceed 50%.

So in our example above, if Daniel sues Mike for personal injuries he sustained in the accident, he can recover as long as a jury (or judge) does not find Daniel more than 50% at fault for the accident.  If the jury decides that Daniel is 51% at fault for the accident, and Mike is only 49% responsible for the accident, he can recover nothing – no matter how serious his injures.  So in this example, a jury determined that Mike is at fault (49%), but he is not liable for any damages because Daniel’s (the Plaintiff) comparative fault is over 50%.  Hopefully, this clears up the difference between fault and liability.

If a person is determined to be liable (responsible) for an accident by a jury or judge (or if they admit liability), then the next step is to determine how much damages to award the injured party.  Here are a few (not exhaustive) factors a jury may consider when determining the value of an injury and damage award:

The injuries/damages that a Plaintiff is claiming has to be caused by the person deemed to be at fault for the accident.  So you can’t have a brain tumor and request damages for the brain tumor because of a car accident – unless you have a doctor who will testify that the brain tumor was caused by the accident somehow.  Likewise, if you have a pre-existing condition, you cannot recover for that condition – unless it was aggravated by the accident, in which case you can recover only for the aggravation.  Evidence at trial that a particular injury was caused by an accident or aggravated by an accident almost always has to be presented by a doctor.

Damages awards are the most difficult thing to predict in a negligence case.  Certain types of damages are easier to prove than others.  For example, if an injured person incurred $32,000 worth of medical bills, he can recover those amounts if he proves at trial that they were reasonable, necessary, and caused by the accident.  Likewise, if a person lost $2,465 in wages because of missing work, then he can recover that as well.  Those are called special damages and they are usually easily calculable and proved with the medical bills and or paycheck stubs.  On the list above, 3, 5, and 6 are special damages.

The more difficult type of damages to prove or predict is known as general damages.  This is the type of damages awarded for pain and suffering or permanency of an injury.  There is no book that lawyers can open to point to and say to a jury, look a broken wrist is worth this amount of money.  It is up to a jury (or a judge if no jury trial is requested) at trial to decide how much the Plaintiff’s pain and suffering is worth or the parties can agree on an amount in a settlement (this is usually what happens 90% of the time).  Juries sometimes have a hard time with figuring out the value of pain and suffering.  And because every jury is made up of different citizens with different backgrounds and life experiences, the damage awards are rarely consistent.

If a juror was asked how much a gallon of milk or a car was worth, they could easily reference it from their life experiences and come up with a fairly accurate value.  But when asked to value the pain and suffering for a broken ankle, or a cut to the forehead, or becoming quadriplegic, it is much more difficult.  So it is up to the lawyers to argue to the jury about how much they should award in general damages for things like pain and suffering or the permanent loss of a limb.

Once the jury makes a decision on the total value of the damages, another important thing to note is how comparative fault, which we discussed above, affects a damage recovery.  As you can see by number one on the list above, whether a Plaintiff contributed to the accident is considered in calculating damages.  This is because under Indiana comparative fault scheme, any percentage of fault will reduce damages proportionally.

Now that we (hopefully) have a basic understanding of how negligence law works in Indiana, we need to look at how these things work with a fatal car accident in Indiana and a wrongful death suit. 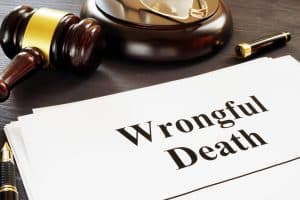 First, you should know that historically under the common law, parents, a widow, children, or a personal representative of an estate could not file a lawsuit for the death of a loved one – even if caused by the negligence of another.  Essentially, the personal injury claim was extinguished with the person’s death.  So the Indiana legislature passed the Indiana Wrongful Death Statute which changed the law in Indiana to allow surviving spouse, dependents, or next of kin who have lost loved ones to bring a negligence suit and be compensated for their loss due to the negligence of another person or company.

There are three relevant wrongful death statutes in Indiana:

Since a lawsuit for wrongful death did not exist at common law, these wrongful death statutes passed by the legislature to allow for these types of suits control the lawsuit and change the rules a bit that we discussed above.  So let’s review each one to understand how a wrongful death lawsuit differs from a traditional negligence lawsuit.

There is a lot of information in this wrongful death statute, and the language is rather old-fashioned, so let’s break down some of the important information contained in this statute:

The next section is often referred to as the Adult Wrongful Death Act.  While the General Wrongful Death Act also applies to adults, this statute will be used instead of the general wrongful death statute when an adult is UNMARRIED and has NO dependent (think minor) children or dependent next of kin.  A dependent next of kin could be an adult child with special needs who relies on parents to function or elderly parents who are cared for and live with the decedent.

So for example, if someone is killed in fatal car accident in Indiana due to the negligence of another, and that person was in their 60s, was unmarried or a widow at the time of death, and only has adult children surviving them, then this statute would be used instead of the general wrongful death statute.

In terms of damages, the major differences between this statute and the general wrongful death statute are the $300,000 cap in damages and that loss of earnings cannot be recovered.  These differences can cause large differences in damage awards.

For example, let’s say a 35 year heart surgeon is killed in a fatal car accident in Indiana.  If he is married or has minor children, his estate can recover for his loss of love and companionship to his spouse and children AND also for his lost earnings.  If the heart surgeon is making $2,000,000 a year at the time of his death, the jury can award his estate 30 years of earnings or $60,000,000 just for lost earnings that he would have earned during his lifetime and from which they would have benefited.  However, if that same 35 year old heart surgeon was unmarried and had no minor children at the time of the fatal car accident in Indiana, the most his parents or his non-dependent adult children could recover is $300,000 under the Adult Wrongful Death Act.

The last wrongful death section is referred to as the Indiana Child Wrongful Death Act.  As its name implies, it is applicable to the deaths of children (under age of 20 or 23 if in college) due to the negligence of another.  The statute is contained in Indiana Code § 34-23-2-1 and here is some of the relevant information from that statute:

Schedule a Free Consultation with an Indianapolis Car Accident Lawyer

Call 1-877-77-AVNET today for a free initial consultation or contact us below with any questions you may have about your case.